It has been estimated that approximately 30% of current R&D spend in pharmaceutical companies is focused on the development of kinase inhibitors. Protein kinases have become one of the pharmaceutical industry’s most important class of drug target.

To date, 89 drugs targeting protein kinases have been clinically approved (see table below or as a pdf to view structures at a higher resolution). They include Gleevec, an inhibitor of the Bcr-Abl tyrosine kinase, which has transformed chronic myelogenous leukaemia from a disease that was rapidly fatal into a manageable condition.

The current global market for kinase therapies is about US$20 billion per annum, forecast to increase markedly. There are over 100 small-molecule kinase inhibitors active in late stages of clinical development and many more are likely to be approved in the coming years.

As only about 10% of kinases have been studied in detail there is still much to understand on the roles that protein kinases play in human health and disease.

We believe that development of kinase inhibitors will remain at the forefront of medicine for the foreseeable future.

We feel that it is a matter of when but not if the landmark of 100 approved kinase inhibitors will be reached. 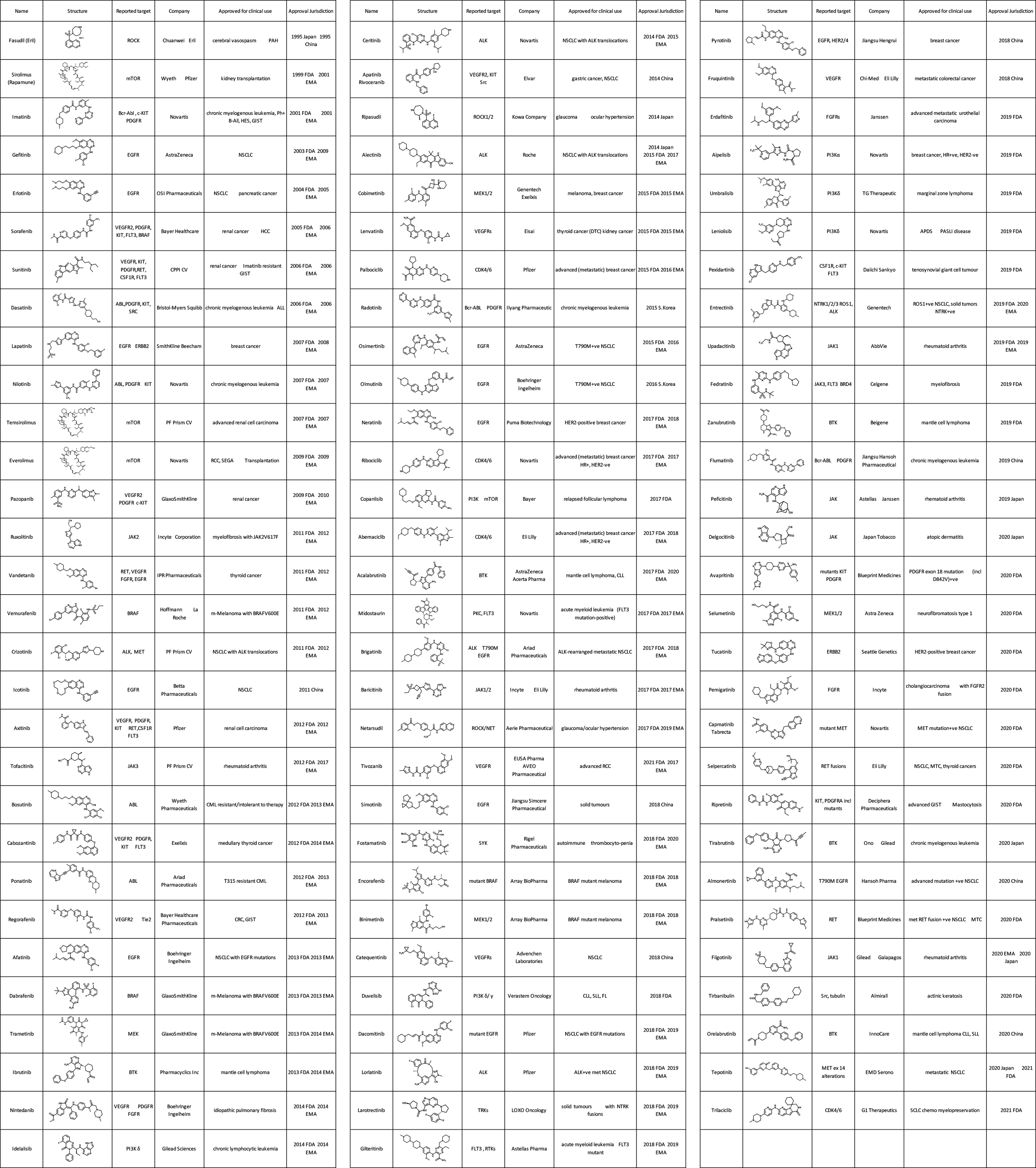 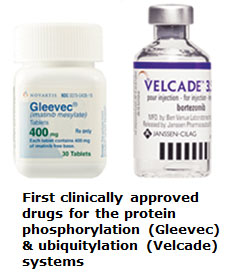 Although we know the identity of most of the circa 1000 proteins that are likely to be players in regulating ubiquitylation pathways, there is little information on which components in these pathways would represent the best targets for treatment of disease. Most have not been studied in depth and few have been knocked out in mice. A key aim for the MRC-PPU will be to advance understanding of the role of ubiquitylation and related modifications in cell regulation and human disease, and then to define and validate which components might represent the best drug targets. Another key remit of our research will be to generate reagents and improve technologies that will help to advance ubiquitylation research.

In order to stimulate interest from the pharmaceutical industry, we have recently taken steps to broaden the remit of our DSTT collaboration with the Pharmaceutical industry which from July 2012, encompasses the study of the phosphorylation ubiquitylation system. We are also involved in the MRC International Mouse Phenotyping Consortium to generate and characterise the phenotypes of around 150 key disease-linked gene knock-outs that encode components of the ubiquitylation system. We are excited about the potential of this new consortium and expect it to lead to essential new understanding of the physiological processes that are controlled by components of the ubiquitylation system. This can only accelerate our understanding of the ubiquitin system and help pinpoint possible drug targets. The knock-out mice and cell lines derived from the consortium will be made available to all academic and industry researchers to enhance understanding of the ubiquitin system. We are also working closely with our pharmaceutical collaborators to ensure that the MRC Mouse Phenotyping Consortium analyses targets of high priority to drug discovery efforts.